About this banner... I just went and looked at my favorite people who really seem to get along really well~
and for those who want to add me, this can be a glimpse of my fandom. XD

I have have decided to put my personal entries on friend lock but if you're interested in getting to know me more go ahead and add me up. XD

This post is currently under construction since I have yet to add updates. ^^;
Please bear with me. :3

Hi everyone! It's been a long time! I have been very quiet in the past month. I can't believe that it's already July. Half the year has already passed! Wow.

I honestly haven't finished the Spring Dramas in my list. lol I've only managed to finished The Long Goodbye. I'm gonna try to post something about it soon. Other than that, all I did was watch films and catch up on the new Hunter x Hunter anime. (lol) But here I am sharing my Summer Watch list.

I think that's it. lol Four dramas and a rant for the summer season. lol 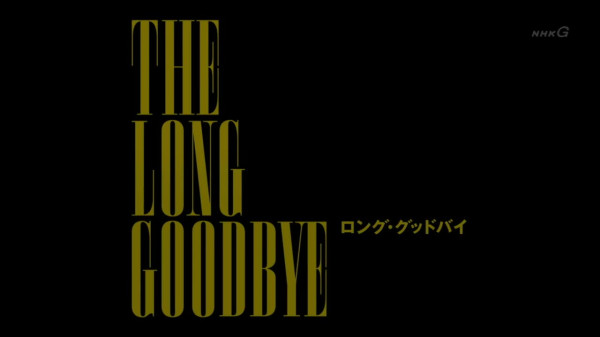 I just saw the first episode on Friday (or was it Thursday? lol) and I watched it again last weekend then yesterday (for the screencaps) and it is still awesome! The drama is based on the novel of the same title by Raymond Chandler. I'm planning to grab a copy of the book after I finish the drama.

First, the classic setting and the cinematography is AMAZING. This drama is visually stunning. The details like the newspapers, the cars, the buildings, the props, the costume, hair and make-up... everything is pretty! It also doesn't hurt that the actors are pretty to look at.

Acting-wise, I have nothing else to say aside from it being awesome because once Asano Tadanobu chooses his roles especially in dramas it should be anticipated that he chose a very good one to star in. I haven't really seen everything in his filmography but I know that he is a very good actor and is well-respected in the industry. Ayano Go did well too, in my opinion. Although, the gap between him and Asano-san is strikingly obvious. However, I really liked the way Banji-san and Tamotsu's friendship was built up. The scenes came across as convincing and sincere. I really enjoyed Emoto Akira's portrayal of media mogul who aspires to be a politician. He is also the father of the victim. I also liked Takito Kenichi's acting as Morita, a newspaper reporter, especially with his last scene in the episode.

Otomo Yoshihide (Amachan) did the soundtrack for the drama and he is a genius. The played in the background were perfect for the drama.

Anyway, I'll just let some of the screenshots to do the talking for me. XD

I've been having internet connection problems lately. Every time I try to post something lengthy, lj comes up with different errors. I actually have both wordpress and blogger accounts (I haven't opened them for the longest time, I wonder if they still exist. XD) but I always come back to lj. It just holds a special place in my fangirl heart. 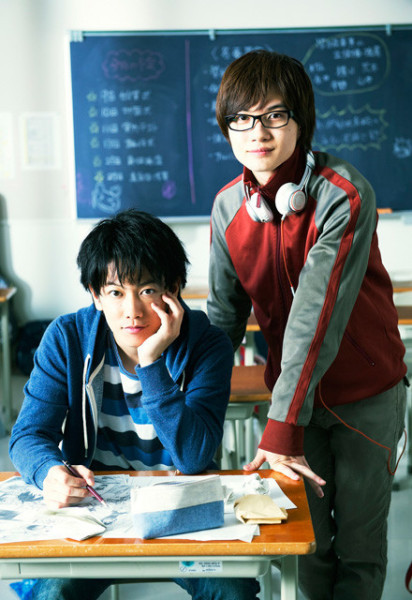 Speaking of fangirling, Bakuman! is finally making it's way to 3D, I mean real life. lol When I was reading the manga I always thought that this would translate well in live-action. It's slice-of-life so it's easier to adapt rather than fantasy and high-action mangas like Death Note and Rurouni Kenshin. Also, it would also be really cool if they managed to film at the actual Shueisha office. :3

---
I haven't really caught up with my spring dramas. I'll just make a batch post for the first impressions. It should be out soon. ^^; 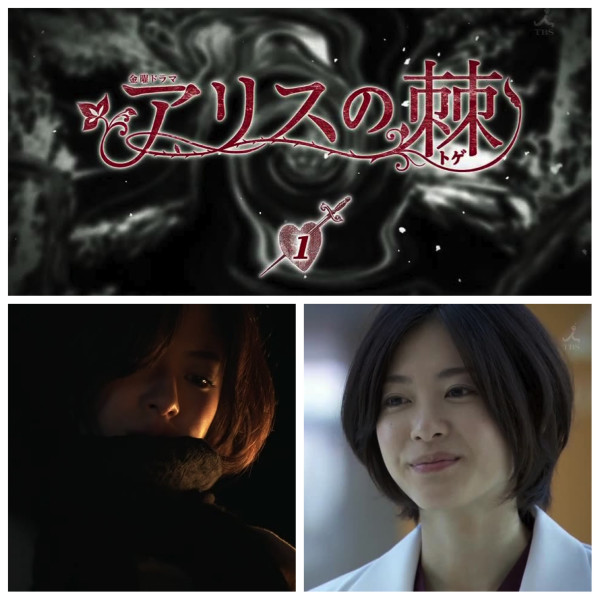 (I think the image is too large. orz LJ doesn't have the option to customize the image size anymore. Sorry.)
I couldn't resist waiting for the subs so I ended up watching it last night.

The first episode was intense! I honestly didn't expect it to be that dark especially the first fifteen minutes. It got me glued to the screen. I'm glad to know that it got 14.2% ratings for its time slot (apparently it's the highest rated renzoku at the moment. source). A lot of things happened in the episode as it was fast-paced. I'll leave out the details for later. The general summary can be read HERE @ jdramas weblog.

Ueno Juri. Jurippe~ Her acting was amazing. She was great. This is really far from her usual image. Even far from Ruka in Last Friends. You wouldn't be able to keep your eyes off her. Oh, how I missed watching her. I hope that this role will open more opportunities for her future roles especially in movies.

The supporting cast are great. Juri and Odagiri Joe displayed great chemistry and tension, in my opinion. It honestly wasn't what I expected from them when the cast was first announced. Kuriyama Chiaki, I feel that she can do or will do a lot more in the next few episodes. I do think that Nakamura Aoi might be a weak link here. Let's hope I'm wrong.

I thought that the way they used colors for the drama was fascinating. I didn't feel that the flashback scenes were boring either. I found the confrontation scene a bit weird though. I thought that the direction in that part was a bit over the top. But, the way she handled her revenge was unpredictable. I was actually expecting this drama to be a little similar to Guilty~ Akuma Keiyakushita Onna~ but it was a lot more similar to Maou. I guess it shouldn't be surprising as this shares the same time slot as Maou had in 2008.

I'm keeping my fingers crossed that the lines won't be disappointing once it gets subbed and I hope that the flow of the next few episodes will be very consistent if not, better.

I'll write a more detailed (a.k.a. spoiler-filled) post when the subs are out. Hopefully, it'll be out soon! :D

I had very few dramas interested me from last season and I have barely finished them. Lol Actually, I only started watching 2: Lost Days and Ashita, Mama ga inai and I have yet to finish both. I wasn't exactly in the mood to watch.

I had already planned on finishing some dramas that I started watching from last year's list however, I wasn't able to do it as well. What I did was revisit old faves. Basically, I binge watched Nodame Cantabile (drama, 2SPs & 2Movies included), Swing Girls, Saikou no Rikon (drama), Tonari no Totoro, Hauru no Ugoku Shiro, Sen to Chihiro no Kamikakushi and Tiger & Bunny series... I also marathoned Brooklyn Nine-Nine (it's really cool if you guys want to watch a fun american comedy series please do so ;D)

Anyway, Spring is here! I'm quite excited because Spring and Fall drama seasons are my favorites. It's not just the setting of the dramas but it's because I find the drama line-up most interesting in the two seasons. Here's my list: * fingers crossed that I maybe able to watch them all~* 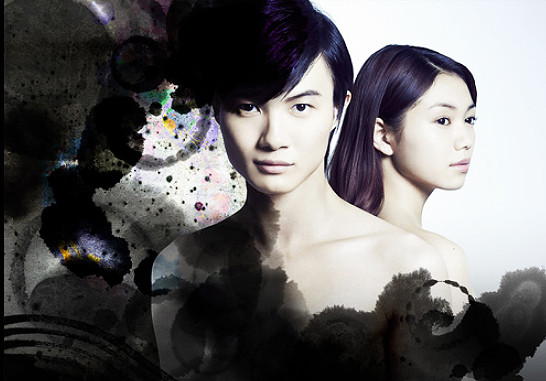 I know I'm more than a week late in posting something about this upcoming drama. The explanation that I can only give you is that I had to wait until I am calmer and more composed before writing. I hope this is acceptable. LOL

sophiapiaya. I wanted to get in front of a computer or at least get a signal so that I can log in through my phone but alas, I was out in the mountains. A week after, I'm still in euphoria.

Since I'm a big Kamiki Ryunosuke fan (as you all know :P), I have been looking out for updates on his next projects while, of course, waiting for the Rurouni Kenshin sequels to be released and while waiting for Kamisama no Iu Toori to start filming in July. So I have actually been updated that he has been filming this WOWOW drama with Nikaido Fumi based on twitter sightings, 2ch comments and Director Nagata Koto's instagram.

Still, I was overjoyed when it was finally confirmed because I have been wanting Ryuu to work on a WOWOW drama and to eventually co-star with Fumi-chan. I never thought that this project would hit two birds with one stone. Not only that, it's a complex story written by Higashino Keigo and that he and Fumi will be playing a couple with a good supporting cast.

I have yet to see the movie version of the novel which stars Tamaki Hiroshi and Aoi Yu but I have read not-so-good reviews about it so it got me a bit worried. Then again, this time it will be in a drama so the characters will get fleshed out and the script will have a chance to be improved. I was able to get to read the manga thanks to Mr. Jed Medina and his blog post at pscyho-drama and

cie_chan's investigative skills. You can read the manga version of the novel → HERE←.

I think the material had a lot more in common to Bunshin than I initially thought. Although I would say that Henshin is more interesting and complicated as it happens to one person's life instead of two like in Bunshin. Henshin is still a bit predictable though I guess, based on Higashino Keigo's works that I've been acquainted with, it is more on answering the question “why” than “who”.

Still, I'm very excited to see Ryuu in this role because of the complexities that it offers. It's actually right up in his alley but he just needs to portray Junichi in a more mature and adult approach. Something that I have been waiting for since “11nin mo iru!” has ended. The role he needed to portray reminded me of Tama Eiga Award's description of him: "Naive and comical, dangerous and friendly, innocent and twisted, There's a superb balance and extensive reach in between his performances, there is a high potential and a wide range to portray separate/different characters". (X) I'm extremely happy that he got this role.

As for Fumi-chan, I believe she will nail this. Her character, Megumi, is actually closer to Keiko in Himizu only a bit more older. Also, she got accepted in Keio University! Congratulations! \(^o^)/ I tried to tweet her but I backed out at the last moment. lol (>///<)

Anyway, I really think that this is a very good and interesting combination and I'm looking forward to what kind of chemistry these two will show and hopefully it's the good kind that will make casting directors want to cast them together again. *fingers and toes crossed*

Interestingly, the movie (based on the review that I read) and the manga had different endings. I do think that the manga adaptation is a lot closer to the novel than in the movie but we'll see how the drama will adapt this. 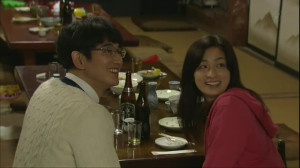 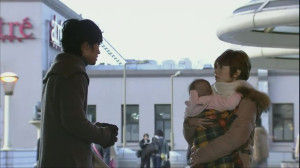 I feel like I can only come up with a short entry or else I'd be posting a long entry about how painful and bittersweet everything is. lol So yeah I ended up choosing the easier option.

It's been weeks since this aired but spoilers ahead, I guess? XD 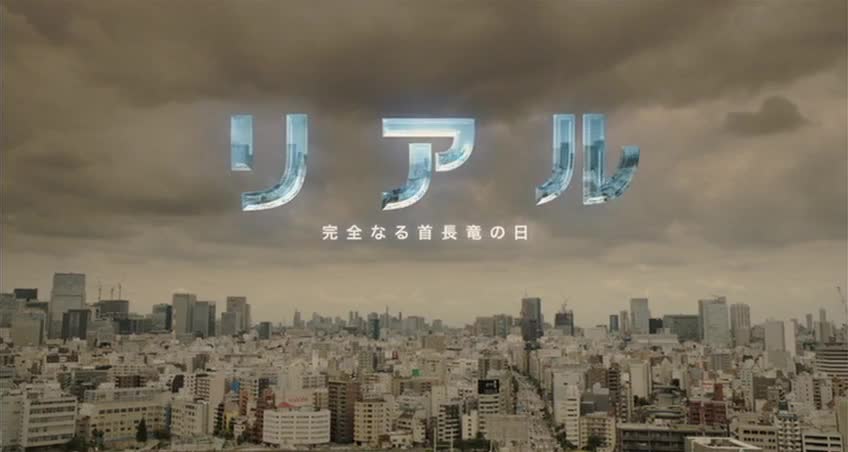 Plot: Koichi (Takeru Sato) & Atsumi (Haruka Ayase) have been friends since their childhood days and they eventually became lovers. About one year ago, Atsumi attempted to commit suicide and fell into a coma afterwards. Koichi, desperate to know why Atsumi attempted suicide, takes part in a new medical procedure that involves the central nervous system. Koichi will enter the subconscious mind of Atsumi through the medical procedure. When Koichi enters the subconscious mind of Atsumi, shes asks Koichi to find a picture of a "plesiosaur" she drew as a child. The drawing is the key that brings back a suppressed childhood memory that brings their minds together. --- asianwiki
( Collapse )
Collapse